Years ago, when my neighbor’s family member got stroke, she immediately sent him for acupuncture treatment the moment he was discharged from hospital. One of my relatives also had stroke and would have been paralysed had not been the wife who diligently brought him to acupuncture treatment.

My dad was not so fortunate. The first time he had stroke, I forcibly sent him to hospital (he had refused to go at first). Outwardly, he seemed to recover fully as his movements and mobility were not affected. He could walk out from the hospital after a few days like a completely normal person.

The second time he got stroke, he was not so lucky. When I rushed him to the emergency room, the doctor told me that he had a ruptured blood vessel of a size of a thumb and it happened at the area where his movement were affected. The doctor told me that my dad would be paralyzed from the waist down even if he recovered. They had wanted to send to a bigger hospital when they could perform the complicated procedure of removing the blood clot from his brain. However, my dad’s heartbeat stop and the ambulans had to turn back. Eventually he slipped into a coma and passed away.

My closest auntie (my mom’s fifth sister) also developed stroke and her entire body was paralyzed. She could not talk. The only thing she could move was her eyes.

I was later informed by the older folks (who have gone though similar experience with their families) that even though the patients seemed to recover fully on the first time, it does not mean so inside. Usually, the second stroke would result in a severe complication. That is why aside from going to hospital, they would take the stroke patient for traditional Chinese treatment even though the patient seemed to have recovered 100%. Usually it is acupuncture.

I wished I had know about this earlier. But what has happened has happened. I could not undo the past. All I can do is write about these things in my blog to create awareness.

Recently I discovered that aside from acupuncture, one can also explore chiropractic treatment. I have back and knee pain which sometimes escalate to painful levels. Of all forms of treatment, I prefer chiropractor treatment because it is instant pain relief and the effect could last for months.

My chiropractor shared with me that he has been able to improve the mobility of some of the stroke patients through chiropractic treatments. 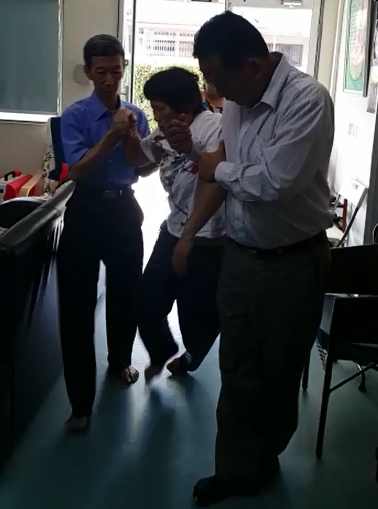 Above: The lady is from China had a stroke which causes paralysis on the left side of her body. She came in on the same day for chiropractic treatment and she was able to walk immediately after the treatment (you may watch the video below).

Below is the video I have placed together from the chiropractor. The second person in the video is a man who have been on wheelchair for more than 10 years as the result of stroke and after a few treatments, he could get up and walk with a walking stick.

However, having undergo neck manupulations during each treatment, there are some possible reasons I could think of as why such treatment can result in stroke in a small minority of cases:

Blood clots can move from one location to another. Obviously, the person was not feeling well and opted to go for treatment. This would require a radioactive barium body scan on the whole body to be able to identify any clots hence it is unlikely this could be traced. Assuming the patient went for Western conventional treatment and shows up at outpatient, he would probably be sent home with some painkillers and muscle relaxants.

Eventually, the clot may travel up to the brain resulting in a stroke.

Each time when I go for chiropractic treatment, the chiropractors would perform neck manuplations- basically they grab your neck, ask you to relax and not tense up and then they give it a pull on the left and right side. I can tell you, after these manuplations, the neck and shoulder tension goes away.

However, my current chiropractor, Dr Lo would actually massage some points in my neck. This is something that the previous chiropractor did not do. The manner he did the massage is not the same with any ordinary massage that you get when you go to a spa for massage. It is similar to using origin point therapy and it is uncomfortable, ‘geli’ and a little painful at times. He told me that this has to be done as massaging the specific points at the neck helps to prevent stroke.

In other words, I feel that the treatment need to combine with other forms of treatment to release the meridian blockages in the body. Purely chiropractic treatment is effective for most patients but for a someone who is on the verge of stroke, it is possible that the condition gets aggravated…. which is really unfortunate.

My previous chiropractor, even though he did not combine elements of TCM in his treatments, he uses what I felt as energy rebalancing after he performed the standard chiropractic adjustments… which always include neck manupulations each time at least for me.

Stroke is not a condition that just happened overnight. It is build up for years and often a traditional practitioner would be able to tell the dangers of you getting a stroke through blockages at certain meridian points in your body.

When I went for origin point therapy  (prior to 2013) for my knee pain, the practitioner was pressing some points in my butt which felt so PAINFUL that I felt like I am going to give birth. He told me I am going to develop stroke eventually if I did not release the blockages in my body. According to him, there is pain because there are severe blockages there. When I wanted to get up, he used another hand to press me down to complete the treatment.

Some treatments can be effective and some may not be effective. Call it what you wish, but sometimes certain ‘unexplained intervention’ can come in when our time on this earth is up or that certain incidents are meant to happen. Hence regardless of where the person go for treatment, it would probably make the condition worse. Usually if we go for conventional treatment, we would accept the reality.

But the poor alternative practitioner, who have healed countless number of people was unfortunate to make a particular’s person condition worsen. Because complimentary and traditional therapies are never recognized and fully regulated, the practitioner gets a malpractice suit.

For example, few years ago a friend of mine went to hospital to give birth to her fourth child. She was 40 years old and opted for natural birth instead of a cesarean. She was completely active, healthy lady in normal weight range. Checkups with the gynea indicated she could still have natural birth.

She left the hospital in a casket.

The cause of death…. the fluid in her womb flowed upwards to her lungs and literally drowned her. Both she and the baby passed away. It was a shock to us all- was there any negligence? Or was it an unfortunate incident that no one could have done anything about? Until today, I still cannot believe she is gone as I look back at her photos which I have taken for her personally just a few years prior to her passing away.

Another case was one my relatives who developed nose cancer who opted for conventional treatment. He was scheduled for radiotherapy but strange enough….the radiotherapy machine happened to be down when he wanted to go for treatment. So he was referred to another hospital, went there… and you know what, the machine was down too. Then the 3rd time he went on another day it was also like this. I mean, what are the odds of such thing happening? Radiotherapy machines don’t just break down in large hospitals frequently rite?

That time, I had a bad feeling that perhaps he should not opt for radiotherapy but I am just very young then and did not know what to say. Eventually he passed away in less than 2 years in his fifties.

In my opinion, acupuncture and chiropractic treatments are very effective …..a worthwhile shot to restore or at least improve mobility after stroke. It would require more than one treatment to see results but at least give these treatments a try. The patient needs to get to these treatments as soon as possible after being discharged from hospital.

If you seemed to recover completely from the first stroke, please opt for regular acupuncture treatments as a preventive measure.

Why you must always have health insurance.

Relieving lower back pain and pain in the kidney area

Finding happiness and meaning in caregiving, minimizing caregiver burnout
Why the pain got worse after traditional treatment/ chiropractor?