On book that I have read is “Emotional Healing, complementary solutions for a stress-free life” by Jan De Vries.

The book discuss about the role of emotions in health problems and unhappiness. The author mentioned that his inspiration to write the book began from Carol Keating, a well known broadcaster and television presenter who made a series of programmes that look at the many health issues that exist today relating to people’s emotions. The programme also explained how some health problems needed to be looked at from a different way. 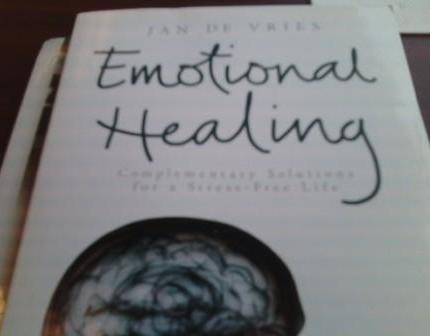 In the book, he dicusses the roles of such emotions and offer suggestions on how to work on them: stress, fear, grief, guilt, hate, jealousy, depression, unhappy relationships, suicides, eating disorders, hormonal imbalance, loneliness. He also wrote on how forgiveness and friendship can help people. As Mr De Vries practices holistic medicine like irodology, homeopathy, cranial osteopathy, acupuncture, he was able to complement the treatment by using these methods that provided relief for his patients.

He dealt with topics in a matter of fact way that is not usually discussed in depth in health book- for example that feelings of jealousy could be the root of a lot of unhappiness faced by people. And jealousy is usually something that many people would not admit. He also spoke about feelings of loneliness- that many people tend to face. Case studies that he had given is very real and something we can all relate to.

For example, he mentioned about how one of his patient, who had served many people. But at his time of need, there was no one by his side and he felt all alone.  He also gave a story of a despaired young girl who literally died of a broken heart after being left by her partner.

The book is sold in MPH bookstore for Rm45.90. You may also purchase it from Amazon .

When you just cannot fall asleep at night
Answering the call to be a healer - story of Joe Cassidy
The Heart Attack Personality
Acu cupping therapy to relieve lower back pain
Spread the love
book review, Holistic Cures, Inner Peace, mind over matter