Do you feel the constant urge to pee, ie you need to go to the bathroom very often to relieve yourself? And you do often get incontinent, for example a cough and sneeze would cause you to soil your panties? That you often need to go wearing a sanitary pad, or in bad cases, an adult day diaper?

Note: If the urge to pee is also accompanied by pain during urination, or constant discomfort down there, or there is blood in your pee (but you are not on your period), please see your doctor. You would likely be suffering from urinary track infection, in which you may require a course of antibiotics to clear it.

I am not a qualified doctor, but at times of my life I, and some gal pals I know suffer from this condition. Here are the steps I have taken which has helped me and I hope it would help for you too. 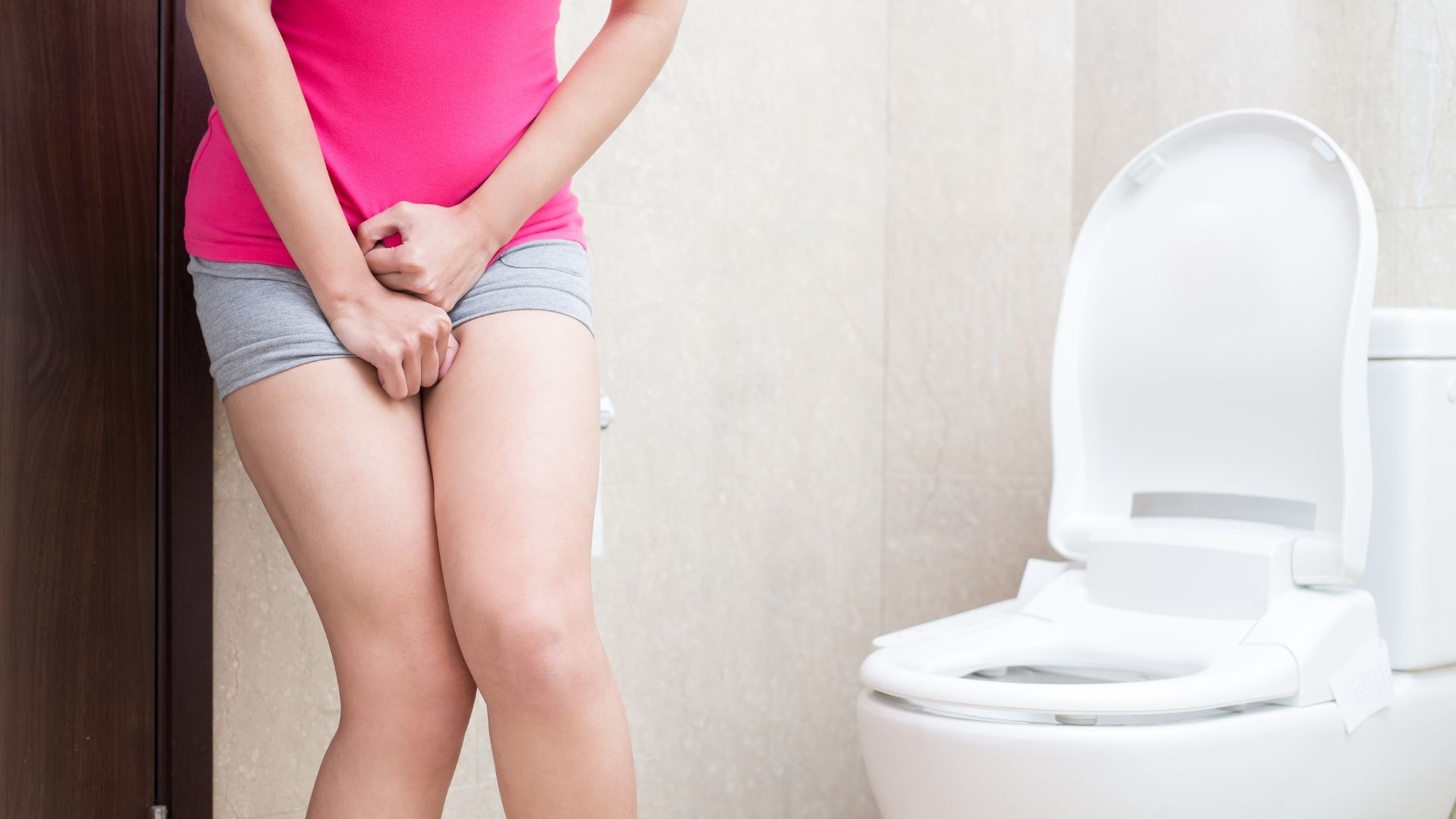 1. Stay away from cold/iced/refrigerated drinks

Iced or cold drinks causes the body to grow more ‘yin’, or ‘cold’ from the Traditional Chinese healing (TCM) perspective. I know elders who literally never took any cold or iced drinks and never suffer from this condition. We can hurt our body when we drink cold water or milk first thing in the morning when waking up. If you have this condition and often take iced drinks, try eliminating cold drinks for a few weeks to see if your condition improves.

And, have the habit of drinking a glass of warm water (actually as hot as you could take), first thing in the morning before consuming anything or even brushing your teeth. This is something I have done for years almost without fail each morning. If not anything, my digestive health have greatly improved just from this habit.

2. Avoid tea of any kind

If generally you find yourself feeling cold easily or being less tolerant of cold than heat, it implies your body’s composition, from the TCM’s perspective is too ‘yin’. If one’s body composition is too ‘yin’, taking the wrong type of food or drinks can easily trigger recurring sinus, vaginal discharge, incontinence and frequent urge to pee. For me personally, my favourite drink in the whole world is iced milk tea. Specifically known as ‘teh ais’ in Malaysia in Chinese restaurants, made by the sifus. For you it may be iced lemon tea or just even hot Macha tea.

I have been warned by Chinese TCM doctors as well as elders to stop my intake of tea as my body composition is not compatible to drinking tea. In fact, drinking tea or iced drinks is really not advisable for women especially for those who felt their body are often very cold inside. As tea, with is cooling and ‘corrosive’ effect would cause one’s health to deteriorate if consumed often.

An exception where it is good to drink a cup of hot tea would be when it comes to taking very oily food like fried rice, steak, fish and chips, etc. Do note that only hot tea would help to clear some of the oil from lining our digestive track. But cold tea do not have that effect (have you ever seen what happens to oily food when you pour cold liquid onto it? It is what that goes on in your digestive track where all food and drinks are mixed together).

If you are from the West, you would find the 2 points above very strange. But give the two suggestions a try. That is avoid cold drinks and any form of tea for at least two weeks to see if you see improvement to your condition.

3. Change the underwear/panties each time we shower or take a bath.

Due to the tropical hot climate, I shower at least twice a day. And each time after I shower, I would ensure I change my underwear. I know in the cold winters, some may not be showering daily. Then, make it a habit to do a wash before you sleep and …….please change the soiled underwear.

The same is applicable to guys as well especially if they find themselves suffering from constant itching down there. There was a guy who actually complained this to me once, I suggested he change his underwear each time he showers. He did and he said it helped tremendously.

4. Discard your underwear after 6 months

Some people would be using the same underwear for years and years. Wearing, washing till the elastic has long stopped working. We should change our set of underwear within 6 months. This is especially so when you find  the underwear smells bad quickly or you get discomfort after a short while of wearing them. And despite washing using Dettol or anti bacteria detergent, the issue still continues. Usually this happens with old underwear and it is time to discard them.

Many women uses panty liners during the day time when working due to excessive discharge that may cause some slight odor. The discharge issue can be reduced when one reduces cold drinks/iced drinks. However, if you must use panty liners, change them. Don’t wear the same one the entire day. For example, in a single workday, change it at least once. Do not try to save on the cost because you may end up with a chronic bacteria infection.

And when you get home from work, discard it and after bathing, change your underwear. Do note that panty liners are lined with plastic, hence it is non breathable. Bacteria growth would increase. Once you adopt the steps above and find improvement, avoid using a pantyliner if you can. Especially if you are at home and not going out, don’t use them.

6. Wash each time after urination/ defecation and wipe with clean cloth towel instead of toilet paper. 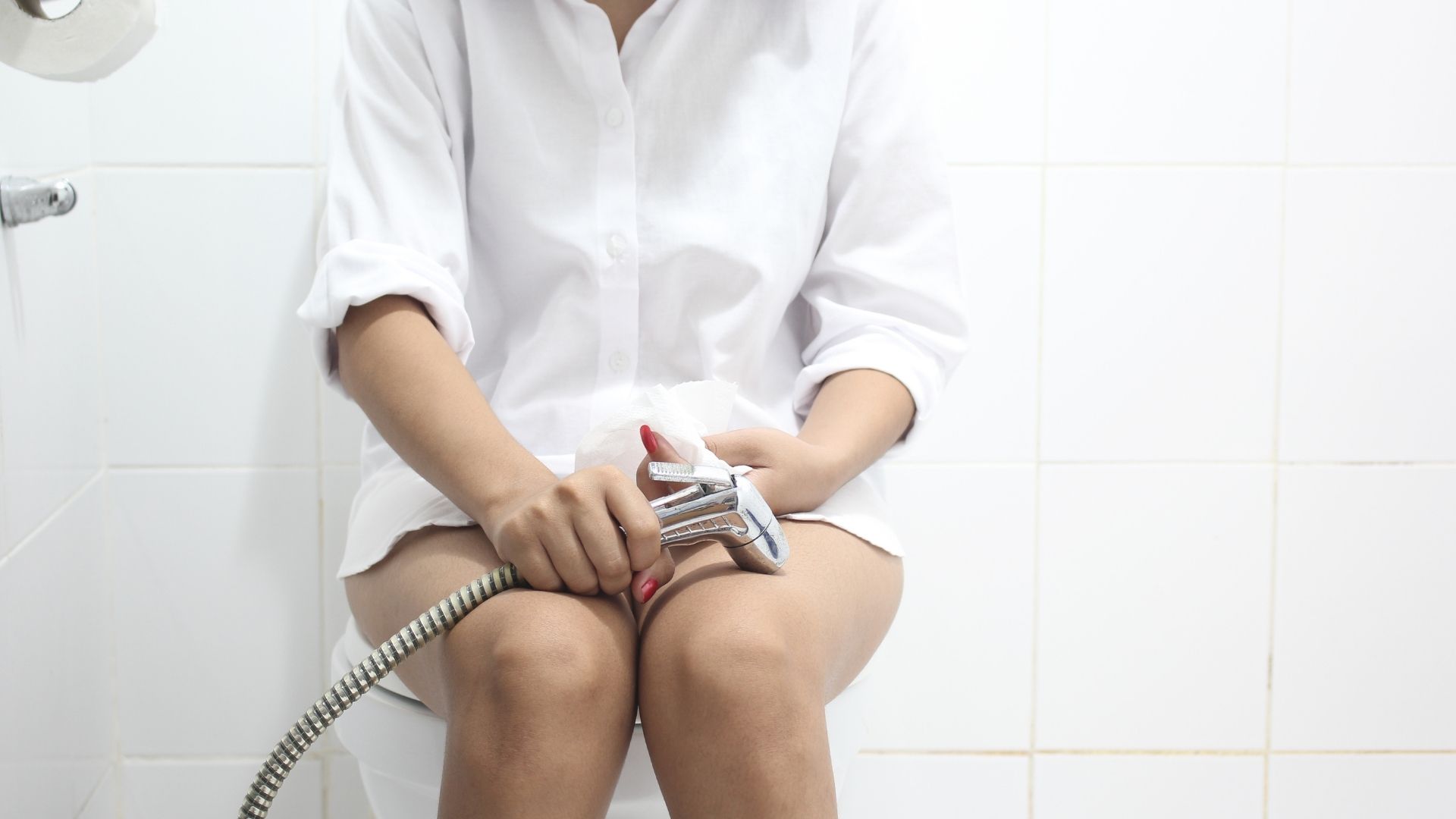 In Malaysia, most toilet are equipped with a bidet, a pipe installed from the sides which allow people to do a quick clean after using the toilet. Perhaps due to the bidet that causes our toilets here to earn its notorious reputation for being dirty. Because likely water would go to the floor and when people step on it with their shoes it would make the toilet look very dirty.

But if you are at home most of the time (many people are stuck at home), it is advisable to have a bidet installed like the picture above so that one can wash onself each time after peeing or pooping. If it is convenient and you have your own dedicated toilet, wipe yourself with a piece of clean cloth instead of toilet paper. This is because toilet rolls are made from pulp which is chemically processed. So when it gets in contact with our privates, it may cause irritation. If you are at outside or at work, then by all means use toilet paper.

At home, in your own toilet, wash yourself after each visit to the toilet, then wipe with a clean piece of cloth. The cloth should only be used for that function alone. When wiping, always wipe from front to back. Change the cloth daily- you can just do a quick wash using anti bacteria bathing liquid or soap. That means you would need 2 small pieces of cloth (in the size of a small face towel) in order to alternate.

Being an avid tea drinker when I was younger (in fact I was addicted to ice tea for a few years of my life), I understand the issue of incontinence and the frequent urge to pee. I have tried the above methods and it has helped me.

Incontinence could also occur in cases such as:

The above are life factors. However, I have known of each cases from above where they do not suffer from incontinence. Kegel exercises have been said to be useful to help control the movement of muscles (for pregnant ladies, please consult with your doctor before trying any form of exercise). And they also watch their diet, ie minimizing the intake of cold beverages. The wiping with cloth towel instead of tissue paper is something I learned from a few older ladies who do not have incontinence or frequent urge to pee.

The tips listed in the article above are what that has been shared with me and I have tried out myself. Hopefully the tips above would be helpful for you. I know the frequent urge to pee as well as incontinence can be a real embarrassment and a hassle. If you find the problem still happening, especially related to the frequent urge to pee, there may be some inflammation which you may require a round of antibiotics to clear. After clearing the infection, adopt the suggestions above and hopefully you would see much less of this issue occurring in future.

More Chinese medicine books are being translated
A reader's experience with the gallbladder flush
Is there a cure for lifelong sinus other than medication?
Yip Har Choo- herb for end stage liver cirrhosis and acute hepatitis
Spread the love
Calendar 2022 (USA holidays with motivational quotes) is available for free download (pdf printable format).
incontinence, urinary

Cold flare ups and pressure in the inner ear

Relief pain in the stomach, left or right side of the abdomen