I believe that some people who developed Alzheimer’s in the later stages of their lives may have know something is very wrong years and even decades before their official diagnosis.  If you suspect that your forgetfulness is very unusual, it helps to do more research and equip yourself with the necessary knowledge and keep informed of the latest developments in battling the illness. 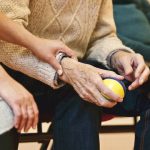 I was sharing with my friend my mom’s current condition whereby the signs of Alzheimer’s is getting pretty obvious. My friend then started sharing with me some tips on managing Alzheimer’s:

I stared at my friend and asked her how come she know so much of facts about Alzheimer’s and Parkinson’s when her parents does not have that condition? Most of the time people would not go around to learn about these facts unless there is an absolute necessity to do so such as it is part of their job or they have to take care of someone who have that condition.

She told me the reason why she is learning about both these conditions is because she is afraid she is going to have it. She finds herself getting very forgetful and she shared that she has already informed her husband that if she gets Alzheimer’s,  she wanted to be put in a home than to trouble her kids to look after her.

Do you know when was the first time I know heard of the word Alzheimer’s? It was when I was in university and from this same friend of mine. In one of our courses, we were required to do an individual presentation on any topic. She picked  Alzheimer’s as her presentation topic. She did some research and was sharing on the symptoms and that there was no known cure.  I remembered the whole room went silent – because her topic was so serious.

I brought this up in our conversation.. that I first learn about this from her during a course presentation she did. She looked a little blank and worried… she said, ‘oh no, how come I have absolutely no recollection of this?’. I told her it was probably because during our course, we have done so many presentation that we would definitely not remember them all. And because she presented something that was so unexpected, it stuck in my mind as a spectator even though if you ask me….I totally forgot what was the topic that I presented in that course.

In the book Alzheimer’s Disease Frequently Asked Question, author Frena Gray Davidson provided the answer to the following question “Q: Do people who are getting Alzheimer’s know there’s something wrong?”

After working with many Alzheimer’s sufferers and talking with their families, it is obvious to me that there’s a much earlier phrase than the one normally identified as “early stage”. This is the “invisible phrase”. It covers the period of time in which the individual concerned knows or suspects that there is something wrong within. This phrase may last many years.

One woman, diagnosed at seventy-four, had written in her diaries twenty years earlier that she was experiencing problems with her thinking. She described “these terrible absentmindedness” that involved both problems of memory and problems in thinking things through.

Another woman, a Jungian psychologist, noted a series of dreams doctors told her she had an incurable brain disease. She did not interpret these dreams literally at the time, and it was only her later illness which retrospectively suggests that she should have.

There is much anecdotal evidence like these examples that suggest interesting questions about how some people have deep inner knowledge of their true state of health, even before any signs of illness are visible to others. The invisible phrase, during which the individual lives with the growing awareness that something is wrong, gradually becomes evident in behavior changes.

I really recommend the book because it is written with the caregiver in mind to help us understand the nature of the illness.

In the case of my mom, she used to say that she is aware she has exceptionally bad memory, more than 25 years before her symptoms started to manifest. She tried to adapt by creating ways to manage her memory. After a few times where she forgotten to get something important from the market and some important appointments, she would scribble a grocery list and put into the pockets of her nursing uniform. She would need to reach out to her pocket for her purse or keys, her hand would touch the piece of paper and she would recall it.

She did this on important appointments or to-dos that she must remember.

On days that she is not working, she would put the list in her purse together with her money. Or she would place it on her dressing table (where she went each day as she would comb her hair each day she got up).

The point I am trying to make is that we have write off the symptoms as a person is just being forgetful. But if the manner is not normal, then we need to take note or obtain an early medical diagnosis. In the case of my mom, I believe her insomnia (after she undergo operation, followed by radiotherapy for her tonsil cancer almost 20 years ago, she has not been able to sleep) could have accelerated her condition.  She was prescribed sleeping tablets by doctors when she told them she could not sleep.

I should have explored alternative treatment- such as bringing her for acupressure and acupuncture to help improve her sleep instead of relying on sleeping tablets. She was practicing wai tan kung, a type of exercise to activate the movement of chi in her body. Her mental faculties were stable. However, a fall she had about 3 years ago made it painful for her to practice. She stopped going to the classes because of the pain- and actually she had refused to go for acupuncture to relief the pain. That time, I was working in a demanding corporate job and did not force …because she had been stubborn and in the past do not belief that having needles inserted all over can help to relief certain health conditions.

If you feel something is not right and that you have occasional memory lapses, I would suggest you explore the following options to prevent or at least delay any possible onset of Alzheimer’s. Some suggestions are:

Cause of forgetfulness- restlessness and remorse
Can acupuncture cure bow legs or knocked knees?
When your poop does not come out completely (Incomplete Defecation)
Why do I keep getting colds, sinus and flu?
Spread the love
Calendar 2022 (USA holidays with motivational quotes) is available for free download (pdf printable format).
Acupuncture, Alzheimer, book review, dementia

Stay interested in the world, take on a challenge

Kudos to Seniors Joining the Gym