The senior came to know about it because years ago, he saw a man in his 40s walking barefoot on the grass at the park. The man shared with him that despite being relatively young (in his 40s), his eyesight was failing rapidly. His doctor actually recommended this method to him as a way to treat his bad eyesight.

Thinking he has nothing much to lose, the man tried the method consistently. Sure enough, his eyesight improved and did not deteriorate further.

The senior himself did this as well and he also found that his eyesight was improving. Most of us tend to resign to the fact that the older we get, it is ‘natural’ for our eyesight to deteriorate. But must it, really?

He mentioned to me that at the age of 81 years old, he is now able to read the papers and books without requiring to wear his glasses. But of course, he also cautioned that he would not overdo it – if he needs to read for a long time, he would still wear his glasses (the power is quite low).

Try it, after all what do you have got to lose? 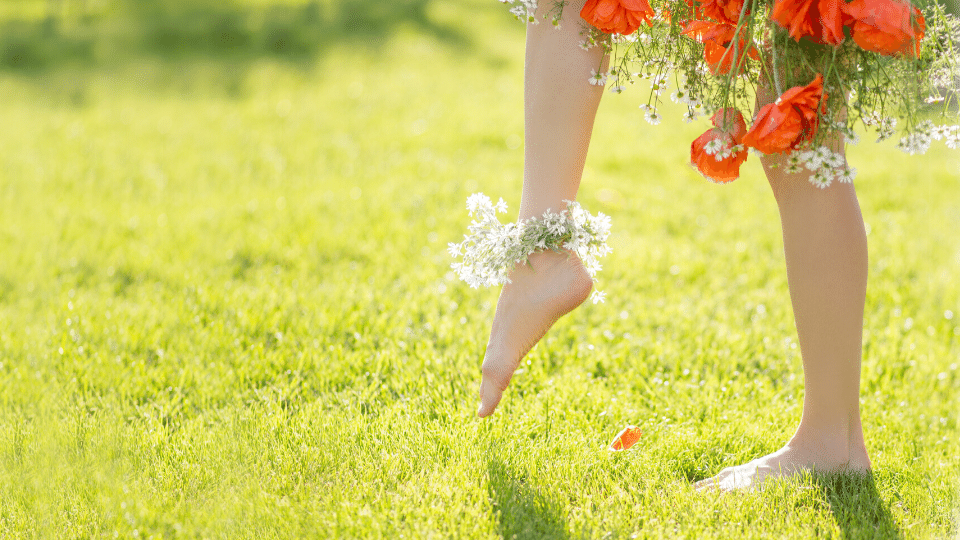 We live and work in townships and high rise buildings so much that all our bare feet ever touch is the cement and tiled floor. When was the the last time you have walked barefoot on the soil?

There is a young boy that I frequently see in the park- he is only about 5 years old and yet he is already wearing glasses. His dad also wear glasses like him. And they live in a fully tiled house- from the inside to the compound. Perhaps if the little boy is running barefoot more often, he may find his eyesight improving.

I have grown up with classmates with the power of approaching 1000 before they even turn 18 years old. Without the spectacles, they are literally as blind as the bats (hmmm….there are studies that say that bats are actually not blind as we have thought but well).

During our time eye laser surgery was unheard off. However even if one go for the laser surgery, the effect wears off after sometime. In fact, a friend just shared with me that since she went for laser correction surgery in 2007, she has to live with constant dry eyes. Specialised (and expensive) eyedrops is something she has to use few days a day.

Before asking you to try, I have tried this myself. Yes, there would be the initial hurdles of the fear of stepping into yucky stuff such as worm pooh, eggs of some bugs, dog/cat pooh or some sharp objects. You just need to do your best to look where you are stepping to. But I did it because my eyes were not feeling particularly comfortable- too much straining on the laptop plus some time spent on YouTube (sometimes lying down)  watching educational videos.

After even the first time of walking barefoot, my eyes felt better. It was strange but it does help.

And also, I have started to wear glasses when I am in front of my laptop as I felt eye strain whenever I tried to work at my laptop. By the third time of stepping on the ground, I was doing work on my laptop without my glasses.

I believe the method may potentially work because stepping on the real soil actually discharge electromagnetic energies and static electricity from your body (do you frequently feel a mild electric shock when in contact with certain items?). There was a short period long time ago when I got a mild static jolt when I touched something like my office chair. And I do feel a little ‘charged’ when I am working in front of the computer, talking on my mobile or happened to fall asleep with my phone next to me.

If that happens, I would feel so much better after about 10 minutes of walking barefoot on the soil at my garden. It is therapeutic and somehow help me to relief stress- as if negative energies are sent to the ground.  The only little inconvenience is getting my feet dirty (nothing a good wash cannot fix) or stepping on my doggie’s pooh (yikes!). But the positive feeling makes the inconvenience worthwhile.

I remember reading that too much of oxidants in the body contributes to eye sight issue. Stepping on the bare earth may have the effect to discharge the ions from the body. At the very least, you would feel better after the walk on the bare earth as opposed to on tiles. Just be mindful of sharp objects, doggie pooh and thorny plants. A well maintain park would be ideal to take such walks.

Seniors Can Exercise Without the Gym Too!
Unable to move the eyeballs- and later diagnosed with tumor
Bonny Rider for improving limb coordination
Inflammed eyes or conjunctivitis- someone got on your nerves?
Spread the love
Calendar 2022 (USA holidays with motivational quotes) is available for free download (pdf printable format).
electromagnetic, eyes

Fever and danger of death due to inflammation

Do people who got Alzheimer’s know it years before the official diagnosis?
Nutritious Chinese soup using slow cooker for health benefits