Korean dramas are a totally different genre compared to other dramas. They are simply and absolutely addictive. The scenes are so emotional, so compelling and how the actors/actresses could speak without words using their eyes and body language so effectively and intensely.

I know because I have gone through it before. I know how you feel and if you really want to beat this addiction, you can.

It started with the Korean drama Sword and Flower (also known as Blade and Petal). Someone in my family was watching the show and I caught a few glimpse of it in passing. I did not really watch the first few episodes. 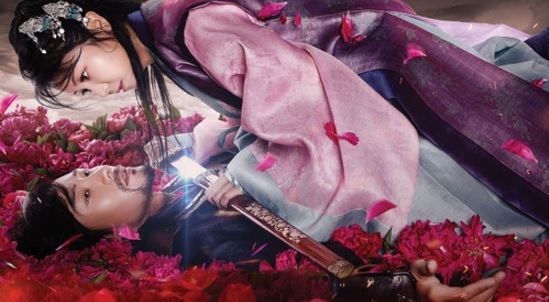 Until the guy’s father killed the girl’s father (her father was the King) and her entire family. The guy tried to stop it but was unsuccessful and the girl misunderstood the guy for the longest time. Then the guy thought the girl was dead and then he went on to help his father to fight war and become a cynical guy.

The thing about the show is the expression and the love you can feel between these two persons who were supposed to be bitter enemies. During that time, the show was still showing and the thing about Korean dramas is often the drama is not yet completed even though it is being shown in TV.

I would never had watched it had I knew the ending.

I do not know what got into the director…. of all things….he had the bad guy killed like literally everyone. OK that’s still acceptable.

But to have both the male and female lead cast die in the last episode? What the???!!! So so anticlimax.

I believe due to this bad planning the show fared badly. Because the storyline during the beginning and the middle was good and engaging. I was really upset for having sat through a few weeks (KBS only show it 2 days a week) only to have it to come to this ending.

Still, this show had raise my curiosity. Even my favourite TVB (Hong Kong dramas), CSI Cyber, House …..can never beat the impact of what Korean dramas have.

This was followed by a movie A Moment to Remember (quite sad ending), and some of my favourites like Sungkungkwan Scandal, Princess Man, A Scholar Who Walks the Night and Personal Taste. For those shows I watched it online/ buy the DVD and basically binged watch many episodes.

My life was like a zombie during the period when I binged watched these shows. And the best part is, I had a ‘comrade’ colleague who also shared my interest in binge watching even though we like to watch different types of Korean drama.

How I overcome the addiction of watching Korean Drama series 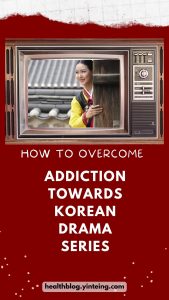 I have written a detailed article on overcoming addiction to Korean drama which I do use many of the methods in the article.

1. If there is a prolonged interruption to watching, then urge to watch reduces

In a year, I used to travel a few times a year to Thailand for about a week plus to two weeks to help out in some work. During that time, I do not have access to the shows. There have been times when I am tempted to cancel my trip so that I could just binge watch but I made myself go. By the time the trip is over, I felt the spell was very weak.

Therefore, if you can put in a force interruption that causes a halt in your binge watching session, the addiction would weaken with time and other distraction.

2. Understand the trigger that causes us to start to watch

There are some issues in real life at one period I am not trying to acknowledge so I choose to watch addictive dramas to zone out and not think about them.

That is why this addiction is as difficult to break as substance addiction because most of us are addicted to certain things to ‘run away’.

When I was studying, I have a house mate who loved to watch TV. One day, she confessed that the reason why she watched TV, even seemingly uninteresting show was to ‘zone out’ and to ‘forget her troubles’.

It is good to live in other people’s reality and to have various scenes of the your favourite dramas replay again and again in your mind than to face our dreary, less interesting life.  But in reality, stuff does not happen the way it does in dramas, especially in unrealistic situations like Korean dramas where the main actor and actress can just bump into each other. Or the parent of the person that the actor/actress is in love with actually killed his/her family.

Take note of the trigger- if you start to crave for this when you are bored, lonely, stressed, sad…. then you need to have backup plan to fall back to instead of watching the show online. Prepare some books (in the age of internet, I still feel that books are important because they contain lots of information in one place) or get your favourite hobby ready or go out for a walk/ workout at the gym.

I noticed for me, it may start on when I go and watch my favourite music video clips. Then I would start flicking the switch to watch TV and when I noticed nothing interesting on TV, I would then go for the drama series. So, I consciously minimize the time I watch music videos… the first trigger. Which is not difficult because I have a lot of work to do daily.

3. Usually people outgrow this addiction by having something that is more important/ urgent

Over the last few years, my workload got more and more demanding. My work uses a lot of my brain to think and write. It came to a point where I could not afford to be sleep deprived as I need 100% of my brain power to focus on solving issues and crisis that seemed to always crop up at work.

Also with the realities of life hitting me left, right and center, I no longer find the Korean dramas appealing because of the huge discrepancies that I see between real life and those played out in dramas.  If I wish to watch some drama series, I go back to Hong Kong TVB dramas which are less addictive and something I can do with or without.

Nowadays in my free time, I would rather work on my blogs, go for a walk, participate in forums to help others than to watch drama. Sometimes my family member watch and I would just go away…. bring either my book or my laptop elsewhere so that I would not get distracted.

Until today, when I hear the soundtrack of the Princess Man or Sword and Petal, I am tempted to re-watch the show or other dramas  (I actually have the DVDs for both the shows) but I would consciously distract myself with something else. It may not be something you can completely get over, but you need to find a workaround to this time and energy consuming addiction.

Maybe it may turn out the same for you…. you may start to binge watch to escape the pressure of studying for exam. I know how you feel. During my time, we do not have online TV but I got crazy into reading novels to escape the reality of the exams. In the end, I also made myself put down the novels and face my fear and study subjects that I hated. I told myself, I would do my best and even though I don’t pass, I know I have tried my best.

Exam is really for our future…. like it or not, we need a paper qualification so that we can get a decent salary.

I’ve known people who are much more talented than me but stuck because they do not have a degree qualification. So, if you want to watch, go for delayed gratification. You are a big boy/ big girl now… tell yourself that you would watch after the exam is over.

The show will be there after your exam is finished. Who knows, after the exam’s over, you may feel so relieved and you may have something else planned for you.

How to overcome addiction to Candy Crush Saga
Life is Short- Does that mean we eat what we want?
How to motivate yourself to drink more water
Overcoming addiction to gambling and achieving success & happiness- real story
Spread the love
1
watch tv

When illness, tragedy and grief pushes one towards personal transformation

Why do I get a rash on my ring finger? Possible Health and Emotional reasons
Kidney failure and the rising costs of dialysis and treatment