It is okay not to be born pretty, handsome or good looking. In this article, I would share some of my experience of living my life as a person with below average look. I feel I am kinda qualified to write this article because I am born with below average looks and struggled with being overweight and negative self image for an earlier part of my life. So I really knows how someone would feel in situation.

I feel compelled to write this after I have seen many people literally bankrupting themselves to pay for plastic surgery to ‘fix’ parts of them that they feel unpretty. Or spending a huge portion of their income on makeup, designer clothings, gym memberships, weight loss products. Or falling into harmful practices like over exercising, starving oneself or bulimia. 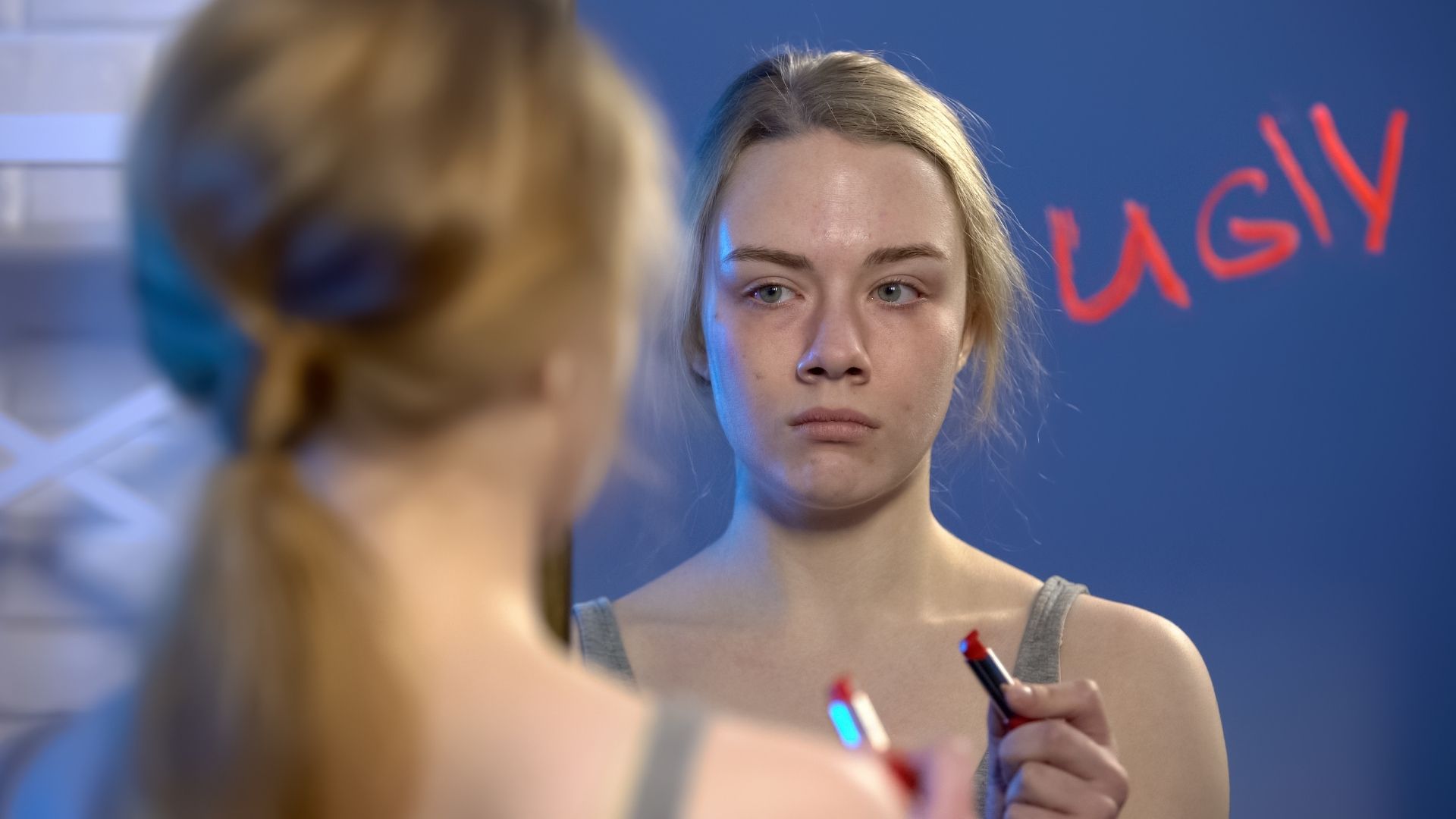 Let me begin by sharing the story of my parents and my childhood because I want you to know that I am not just writing this out of hypocrisy.

I have seen photos of my mom when she was young. She was only average in her looks (possibly due to constant hunger since she lived her childhood in poverty). As she came out to work, she suddenly blossomed from an ugly duckling into a beautiful swan. And with high metabolic rate so she was able to eat a lot without putting on weight. So throughout her twenties she had guys tripping over themselves to chase after her.

Eventually she settled to married my dad, a quiet, shy, down to earth guy. My dad was a breath of fresh air being nerdy and honest. But my dad was not considered good looking. 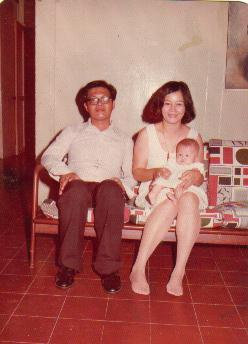 Above: Photo of my dad, mom and me.

When I was born, in terms of features I took after my dad. I only took after my mom’s fair skin, As I was growing up, especially dealing with peer pressure and the need to be accepted, I was constantly dismayed and sad of why I did not look like my mom. My mom used to console me about it and I would (internally) roll my eyes and thought to myself “yeah, that is easy for you to say because you never been through and know how it felt to be ugly”.  Things were made harder when I overeat as a coping mechanism and struggled with weight problems.

Note: As I go through my life, I realized eventually how right she was about why it is okay to be born with below average beauty. Due to the length that this article would take, I would continue about this in my next post.

I was ridiculed and teased by some teachers during primary school for my weight and stupidity (the ADHD made me learn differently from others, which I did not know so I struggled with school). Ironically those teachers that did it were overweight themselves so what the? Then because of the prejudice they had for me, I was sent to a high school well known for its gangsterism and disciplinary problems, a school that no parents would want their kid to be in.

In the gangster school, I thrived and was slowly able to rebuild my self confidence. Why was that? Because NO ONE judged. The teachers had their hands full dealing with gangsterism and disciplinary problems. I was placed in a middle performing class, not the best class but not the worst either. Some of my classmates came from broken homes, and some of their parents are in the midst of a divorce (divorce was literally something very uncommon during my time and was considered a stigma in society then). Most were from poor families. I felt comfortable in the school and slowly my grades started going up.

After I graduated, I came out and work for one of the top corporation in my industry. There was a pressure to keep up with appearance. My colleagues were mostly wearing make up and tailored suits. I tried to buy the expensive makeup but find my skin was allergic to basically any kinda powder be it liquid or powder foundation. Even using brands like hypo allergic brands Clinique, my face still had like rashes. I also sweat easily and in the tropical heat, my foundation and eye shadow constantly run. Especially since I also had to rely on public transport during the early part of my career. And frankly, I really hated the process of putting makeup, worrying that it will run, of touch ups, feeling yucky and then coming back to have to remove my makeup.

One day, I made the decision not to wear makeup. Even with lipstick I found to be a hassle as I need to be extremely careful when I eat, drink or talk. It was either the lipstick will be smeared on the side of my face or I would end up ‘eating’ my lipstick with my food. I did try the long lasting ones which made my lips crack and dry. So I even stopped using them.

Nothing changed. Because I was not dealing with external customers or companies. I was just at the back end working. I was fortunate my bosses look beyond the surface and value performance. I still have friends, each year I get what I feel I deserved as a salary raise and bonus. I also had few suitors despite my below average looks and it is usually after they got to know me better as a person and like my character.

Ya I am gonna say I got a little too much with being ‘too comfortable’ in my skin. After I settled into my second corporate job (also a large multinational company), I got away with wearing clothes that I am comfortable with. And after all the Hush Puppies, Clarks, Snowfly and Scholl shoes costing few hundred bucks each, eventually I settle with a Crocs ladies sandals (my company policy states no sandals allowed at work) which was one of the most comfortable pair of thing I’ve ever worn on my feet in my entire life. It looks like below except mine was black colour (link to Amazon btw but geez, why is Crocs so cheap in US but priced so expensive in Asia? I bought mine for almost USD100 ):

Of course I did not go overboard. When there is an important meeting or visits from VIPs, I would not risk getting my bosses into trouble for breaking the dress code in my company. I would take out my pair of low heels wrapped in a dusty plastic bag hidden in the deep corners of my workstation and wear them. Then put on a coat that usually hung on my chair but hardly got used.

The wonderful part of my higher ups, up to my GM (General Manager) was that they look beyond appearance. I always felt as a staff I was valued because of my work ethnics and performance. Not on how I looked. But before I was able to get to the point where my work could speak for itself, I first had to overcome my own personal barriers.

The barriers where I worried how others would perceived me, and that I am not good enough, fat and ugly. These issues would cause a person to feel down which eventually lead to lack of self confidence (feeling that one is never good enough) and lethargy (that causes tiredness), among other things. Remember, before other people can ever give us a chance, we have to give ourselves a chance. We have to belief in ourselves because we would need that as during the beginning when we are working towards something, we are sure to hit roadblocks and mistakes.

It was only after getting past those inner feelings of unworthiness and self loathing that we can then start focusing instead on what we are truly good at and how to use our abilities to make a contribution at work and in life. If makeup, beautiful clothes and a fit body feels good to you, then by all means, go for it. But do it because it is something you love to do for yourself but not because you feel that you need to have it in order to feel accepted, loved or appreciated.

In the next article, I would share on the advantages of being unpretty or below average look.

Meanwhile, I would leave you with the video from TLC, Unpretty which a commentor rightly mention that “TLC were way ahead of their time. Absolute legends. The message in this song is so relevant even more so now”:

You can buy your hair if it won’t grow
You can fix your nose if he says so
You can buy all the make-up
That M.A.C. can make, but if
You can’t look inside you
Find out who am I to
Be in the position that make me feel
So damn unpretty