The following is written from my own mom’s personal experience in dealing with tonsil cancer. Her adaptive methods has worked for her- but it may not work for everyone. I decided to share the story here when I begin to hear more people whose loved ones struggled with the after effects of radiotherapy from tonsil or other oral cancers- inability to eat, swallow, lost of teeth, taste and no more saliva secretion.

You can also video which I have made that summarizes her experience and how she adapted to the nasty side effects from the radiotherapy treatment:

My own mom was diagnosed with tonsil cancer in year 2000. A few years prior to that, she had noticed that there was a lump at her throat area. But she never did anything because the lump did not give her any pain or discomfort.
However, mom went to see a doctor because a free test that she had taken revealed that she may have high cholesterol.

During the medical checkup, she happened to be attended by a doctor whom my mom had helped years ago when the doctor was just doing housemanship (my mom was an ex-nurse who had always been kind to struggling housemen).  As they were chatting, my mom casually mentioned to the doctor about the lump at her throat- the doctor took one look at it, was concerned and immediately wrote my mom a referral letter to see the ENT specialist.

At the ENT, the biopsy results showed that the lump was cancerous. My mom was diagnosed in April 2000 and the specialist scheduled the operation in May 2000. At first, the specialist wanted to perform a ‘commando’, which is a standard protocol for tonsil cancer. Roughly, a commando is done whereby the patient’s entire jaw is surgically removed, and some flesh or muscle from other parts of the body, such as the thigh, is taken and plastered to replace the removed part. This is done as they do not want to take any risk of having the cancer spread to nearby areas.

But the side effect of the ‘commando’ is that the patient’s face will literally be disfigured- imagine that a person no longer have a jaw.

My mom had refused to have a ‘commando’ done. Instead, she had only requested the specialist to do what they can to surgically remove the cancer cells.

Prior to the operation, the doctor should have advised the patient to visit a dentist to have all teeth checked to ensure none requires any extraction. This is because after operation, especially if radiotherapy is prescribed, the patient can no longer have the teeth extracted.

At about 9am in the morning, my mom was wheeled into the surgery room. The surgery was supposed to only take about 4 hours- but it took much longer than that. Waiting for her alone outside the surgery room must have been the most terrifying period of my life. My mom was wheeled out at about 8pm at night- still unconscious due to the anesthetic. She looked so terrible that I was so scared she may not survived.

The next day, my mom regained consciousness- but she was in so much pain that morphine had to be administered- she was told to press herself if the pain becomes unbearable- and I think that she had pressed more than she was supposed to.

The next few days, her entire face bloated up like a balloon due to fluid retention (after effects of the operation).

She could not take any food orally for about a week, I think and had to be on a drip. After that, she wanted to throw up whatever food that she took. I always remembered that I tried to feed her ice cream and she hid the ice cream beneath her tongue because she did not want to disappoint me. But when the volume got too much, she threw everything out.

If you are visiting a relative or a loved one who is hospitalised and don’t know how what to say- well, sometimes, you need not say anything. Just by being present there, holding the person’s hands provides great comfort. When my mom was in the hospital, many of her friends came over to visit.

Many of my friends came too- because most of them knew my mom personally. Their gesture really touched my heart and till today, I always think of them with gratitude.

And many people have the misconception that a patient would be depressed if they had to stay in the 3rd class ward- so one may feel going private may be better. At first glance, the second or third class ward of a government hospital may be depressing but looks can be deceiving.

My mom is a pensioner, and so she is entitled for first class air conditioned room with 4 beds per room at a government hospital. But as usual, the first class ward is always full. And so was the second class. So my mom had to be placed at the third class ward before she was transferred to second class when there was an available bed. During that time, I had no financial means to put my mom to a private hospital- so I felt so bad. But later, I realised the benefits:

I remembered that when my dad had his first stroke attack, he was placed in the second class ward because the first class ward had no bed space. When we visited him, he was sharing with us about the stories of the other patients- because he was chatting with them during his free time when they had no visitors. He was cheerful because he had so many new friends and people to talk to. And somehow, his recovery was remarkably fast. Unfortunately and sadly, he did not survive his second stroke attack a few years later.

That is why, it may not be the end of the world if you feel like you are in the dumps because you cannot afford private hospitalisation for your loved ones. It all depends on how you view the situation- and your frame of mind is important- you have no choice but to be positive if you want to be a pillar of strength to your loved one. So don’t beat yourself up- third class ward is really not that bad. Most important thing is try to be there as often as you can.

This article is quite long already. In the second part, I will share on my mom’s radiotherapy experience… 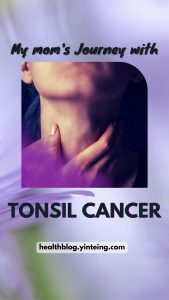 Detoxing the body and mind through fasting
Why it does not pay to be mean, nasty and wicked towards others
Why should I quit smoking when I see people living till a hundred and are smokers
Should a cancer patient do intensive and strenuous exercise
Spread the love
1
Calendar 2022 (USA holidays with motivational quotes) is available for free download (pdf printable format).
Related Pages:  Cancer | Mind Body Connection
mouth cancer, nutrition, oral cancer, organic, radiotherapy, throat cancer, tonsil cancer