A few friends of my mom constantly suffered from chronic conditions such as arthritis, knee and back pain. A particular lady have had very severe back injury as well as very bad knee pain that has greatly impacted her mobility.

She has tried various remedies under the book as well as been to many alternative healers, spending large sums of money.

In the end, through a forwarded email (which is largely circulated in the web), she found relief in a simple remedy: castor oil (minyak jerai).

She said it is very simple- when she is sitting down and relaxing, such as when watching TV, she would take a little bit of the castor oil and rub it round and round on her knee caps. By doing this, she found tremendous pain relief and it is not costly.

She has various bottles of castor oil in her home- as she would try to stock up whenever she is able to find them: 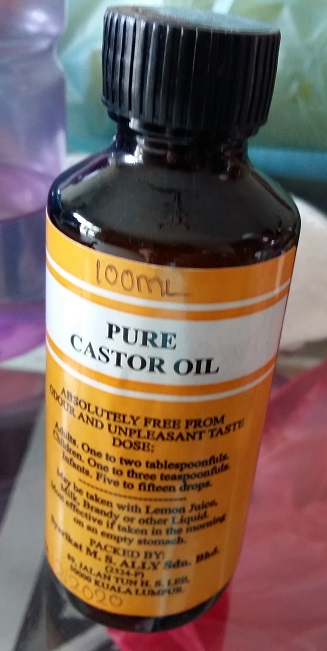 The oil sold in Kuala Lumpur. 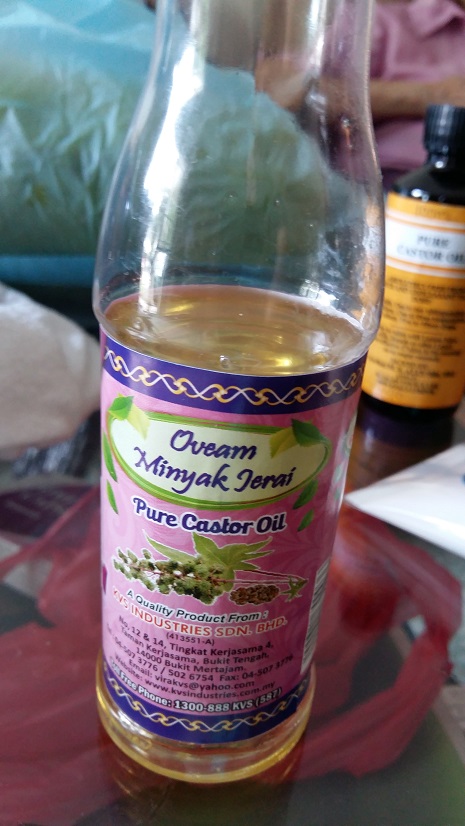 The second and third last bottles were bought from Singapore. You can also get the castor oil from Amazon.

Forwarded email on details on the benefits of castor oil:

Title: Castor Oil Helped Prevent Knee Surgery (you can google for the full story as this has been circulated and forwarded in many emails)

A lady’s husband had hurt/ twisted his knee while getting in and out of a huge truck. The doctor said that surgery would be required to fix his knee but they could not afford surgery. As she had heard some recommendations on the use of castor oil for joint issues, she decided to give the remedy a try. She massaged the castor oil on his whole knee area, then wrapped with an oil cloth (because the castor oil is oily, would stain and would not wash out).

She then placed a heating pad, set on low heat for an hour. The wrappings were kept overnight.

First night, she had to beg her husband to allow her to try the remedy.

On the second night, he reminded her to help fix his knee.

By the third night, he did it himself. He woke up feeling great.

She said they would apply castor oil when they have any joint issue, but heat is not necessarily required.

Another story mentioned that a person had warts on his hands…. he could not cure no matter how he tried (burning/freezing remedies did not work). He applied castor oil to the warts and covered with band aids. He could get rid of the warts that way but he could not recall how many times he reapplied before they go off. But once they went off, they never came back.

Also there are a number of remedies that mentioned that castor oil is good with bruising – apply and wrapped with a plastic wrap (you may try using a cling wrap) and the bruising would disappear.

My mom’s friend mentioned it is difficult to find stores selling castor oil. From the bottles, I got some of the address and contact numbers. Hopefully it would help those who are staying in Malaysia to obtain them:

Are my nose bleeds normal or a bad sign?
Overcoming addiction to gambling and achieving success & happiness- real story
Critique of wet acucupping (bekam) treatment method from a visitor
Why caffeine is bad for our body
Spread the love
Calendar 2022 (USA holidays with motivational quotes) is available for free download (pdf printable format).
knee pain, z