Some of us are born into this world for a purpose. And if we refused to acknowledge the purpose, then we would have varies explainable health problems that could not be cured in the case of a healer. Years ago,  I’ve met a Westerner who used to be a monk for many years in Thailand. When he was a monk, he did various translations and help many Westerners to understand the teachings of Buddhism. However, he disrobed and started a family and things sort of went downhill from there.

I had a feeling that I was placed on this earth for a purpose- and when I refused to acknowledge or have anything to do with it, I had, for almost 2 decades suffered from constant nightmares. At first, I put it down to a stressful job but the nightmares even when I had quit from the job or was on holiday (even though it was not so intense but it is still there). The nightmares sort of stopped with time when I acknowledged that I would accept whatever I was supposed to do.

After that, I have also start noticing that a few people I know also suffered from similar issue of constant nightmares. I sensed that they were also ‘different’ and they have the capacity to help others with their skills but at the moment they are caught in material pursuit and it was not time yet for them to understand this.

Just few days ago, I read a book by Joe Cassidy called “The Diviner– the inspiring true story of a man with uncanny insight and the ability to heal”. The book was so inspirational that I finished it within the same day and I would like to share some inspirational stories from the book. 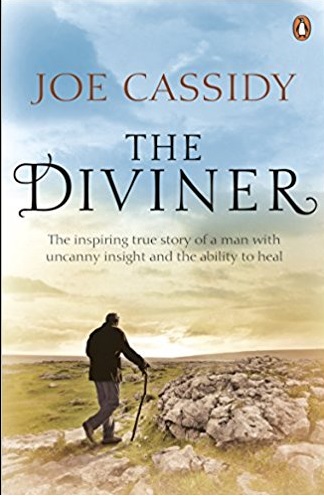 Joe Cassidy was nearly not born into the world- his mother had to undergo a medical emergency to give birth to Joe. And then after he was born, the doctors did not think he would survive- they thought he would be a vegetable. His mother never gave up. He was in the incubator for a few months. When he was brought home, he never cried like any normal child.

One day, a priest (Father Swayne) offered to come over to bless the child (Joe). When his mom bade farewell to the priest, the priest turned the corner and waved at her. She then closed the door and felt as if it was flicking of a switch. The baby cried for the first time.

Joe’s mother gave birth to another 4 more children. Now the funny part was when his mom gave birth to the youngest child, the doctors actually asked her at what age Joe had died. The doctors did not believe when they were told that Joe had not yet died, and in fact Joe was well and alive . They wanted to know if Joe is coming over to the hospital to visit his little newborn brother and when Joe was brought over, how the doctors came in a group to check on him.

He could not believe Joe, who they initially thought was a vegetable, could make it that far.

However, Joe is dyslexic and hence he had more difficulty to learn than other kids in school. And that came during the time when dyslexic was not a common diagnosis and many kids with that condition (or ADHD, Asperger) were classified as below average and some mean teacher would labeled as ‘never amount to anything’.

When Joe was about 12 years old, one day while playing soccer, he came into the house for a while and when looking outside the window, he saw a couple with arms interlinking. He saw a vision of the couple being in a crash after being hit by a drunk driver at Sailins. His mom was doing work at the kitchen and thought that it was news, and not prediction.

A week later, the couple was really involved in an accident. A neighbor came to tell his mother about it and it made her very uncomfortable.

As Joe was growing up, he used to see visions, example he would see someone who did not live in some of the homes he was visiting. He was also very good with animals that he could communicate telepathically with them.

He grew up helping his brother Pat in construction work. He also met the love of his life, Jean and married her. But later, he developed a series of unexplained illness which made him could not work. He was in and out of hospital quiet often. There were so many tests and yet the doctors really could not find what’s wrong with him.

Once, a doctor who mistaken he got MS (multiple sclerosis) actually gave him some medication that he was allergic to and nearly triggered a heart attack.

Ironically, it was a doctor that told him he should embrace his gift. This doctor was known to be very good in her work of the neurology field and wanted to see Joe after meeting Joe’s doctor who could not figure out what’s wrong with Joe. When the doctor was speaking to him, he could tell about the doctor’s background without knowing anything about her (except that she was good in her work). Of course the doctor knew about how sometimes con artists could make a good guess by observation).

It was when Joe told the doctor that when she was studying – she had stolen some money from her granny’s purse and told her feeling, which no one could ever knew except she herself:

“Going back to the money, you knew you’d get a few pounds from your parents. But you wouldn’t get as much as your girlfriends in school would get’. ‘You stole money from your granny’s purse, and that gave you more than the other girls in school.”

The doctor looked at her in silence and said,

“Mr Cassidy. You have to use your gift”.

“You have to use it. For the sake of your health.”

“We deal with medical science here. Obviously I have you here because we’re trying to understand people like you. You are different. I’ve met people with powers before, but I’ve never met anyone with powers as strong as yours seem to be.”

“You mean, nobody else has accused you of stealing a fiver from your granny’s purse?”, asked Joe.

She laughed. ‘Well, that’s true enough! But the important point is that you need to use your gift if you want to get better.’

‘It is. Because the last patient I had with healing powers got so sick from suppressing her gift that she ended up in a wheelchair. You’re having trouble with your health now, but if you accept and work with the gift you have, I think you’ll find your health will improve. It’s suppressing it that’s causing the problems’.

The doctors then wrote down some telephone numbers of people that practice various forms of healing.

He had thought about it for a long time because he did not want to be ridiculed by others, being given funny looks. And he also have a family to look after.

He then recalled a nun in the past who told him when she met him in one of his hospital stays, “Well, I was reading a book the other night about a water diviner. He lives in Wales. Before he realized that he had the gift of divining, his health was bad too. His story, back then, was similar to yours, right now.”

Here is a Youtube video of a radio recording in 2012 during the release of his book:

After that, he begin healing. He has affinity as a water diviner who could sense geopathic stress and waterlines. In his words, he mentioned (pg 80-81):

I use my divining skills to treat houses and buildings that are affected by geopathic stress. The word ‘geopathic’ comes from two Greek words: geo meaning ‘of the earth’ and pathos meaning ‘disease’.  In my experience, most cases of geopathic stress are caused by the effects of underground water lines, excavation disturbances, or energy ley lines interacting with the electromagnetic fields in houses or buildings. If you build your house over these natural underground water lines, a negative energy may well build up in your house, which can lead to all kinds of problems for the people who live there.

When I’m called out to a house, I bring along my divining rod and I determine the location and width of the water lines. Then I neutralize them. I do this by earthing the water lines, which is similar to the principle used in acupuncture. I acupuncture the earth by puncturing it with steel bars. I put a bar into the ground, in the middle of a water line, but it breaks the water at the point of insertion. This diverts the energy of the water downwards away from the house.

In the radio talk show above, he also mentioned he could have been a millionaire but his gift is not intended to make him a millionaire. He had to accept instead of going round questioning ‘why me’….he just did it.

Over the years, he had also silenced many skeptics, and sometimes the mouth hanging expression of shock on their faces can be real funny.  He could do long distance healing,  as well as in person. He never had to promote about himself- people would find him through word of mouth and recommendation. He is very well known in Ireland.

Of course, he could never promise that he could heal all cases or illness. Sometimes, he knew the person’s time on this earth is up – but there may be a purpose on why the patient would be brought to him. But once there was an old man he was healing that he knew would die within 10 days. However, he knew the purpose was to get the patient’s son who is staying in Canada to come home to see his father for the last time. Fortunately the man who brought the patient over is the son’s best friend and he could convince his son so come back. True enough, the hospital tests results revealed that the old man was having terminal cancer. The old man passed away within 10 days.

This book makes an inspirational read especially for those who have long suspected that you have a healing gift but had refused to acknowledge it for reasons such as:

Don’t let any setback, deformity or disability get in the way of your dreams