Unlike the fatty and MSG laden food which one usually find in Chinatown, the typical home cooked meals from a modest Chinese household is simple, easy to learn, tasty, nutritious and can can fit well into a diet plan. Usually served with a bowl of plain rice with 3 dishes and soup. 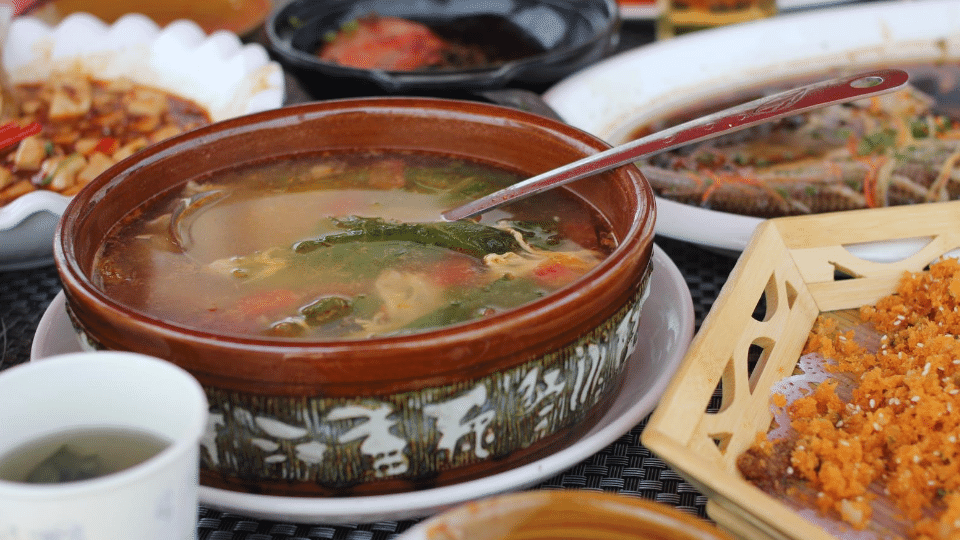 A passage written in the book “Watching The Tree” by Adeline Yen Mah put this well into words… I loved her book because she explained about the rich Chinese culture, practices and beliefs presented in story form, often from her real life. It was the story I browse below while flipping through the book that made me pick it up:

Excerpt from page 121:
The Longs were heirs to one of the greatest fortunes in America. One day Dr Tony Temple, a physician friend,  visited his patient John Long at his home in Florida, where John was recovering from a recent heart attack. Tests done while John was in hospital revealed that he also suffered from high cholesterol as well as prostate cancer.

On entering the house,  Tony noticed six shabbily dressed Chinese workmen laying butterfly tiles in the backyard.  John’s wife explained that she was building a Chinese garden and had hired this crew from Suzhou, in the People’s Republic of China. Though uneducated, the men were experienced and skillful at laying tiles.

John was sitting up in bed eating lunch. Tony was horrified to see cream of mushroom soup, lamb chops with French fries and apple pie a la mode on his tray. “This meal is full of fat and cholesterol. It’s bad for your jeart and prostate. You need fresh vegetables and bean curd. Why don’t you try the Pritikin diet?”, he admonished.

“It’s so tasteless! I tried it but I can’t eat that stuff. I want to enjoy my food! Eating should be a pleasure, not a duty.”

At that moment they became aware of the most delicious aroma of sizzling onions and garlic emanating from the garden. Tony opened the shutters and peered out. Sitting on their haunches around a portable stove, the Chinese workmen were lunching on fresh tomato soup, steamed rice, stir-fried cabbage and a wokful if spicy bean curd sauteed with garlic and chilies.
With a shock, Tony and the Longs suddenly realised that six penniless labourers from China were eating healthier and better-tasting food than their billionaire American employer!

On too much sweat, too little sweat and sugary drinks

Why am I gaining weight after quiting the gym?

Effective and simple exercises to ease lower back pain

Losing weight without a gym membership- some success stories

I Realised Moderation is the Key to Sustained Weight Loss

Losing weight need not be complicated and cost lots of money

When what we want is never enough
Exercise pedal or portable mini exercise bike- can you lose weight on those?