About 65 percent of those with Alzheimer’s or dementia would develop dysphagia, ie difficultity in swallowing. The most noticable symptoms is the person who start choking and coughing especially when taking fluids like water. But not so bad if it is semi fluids or purees.

If you notice your loved one with dementia refusing to eat or drink, and always seemed to cough when they do, it is because eating has given them a lot of discomfort. They may be hostile or aggressive when you attempt to pester them to eat. 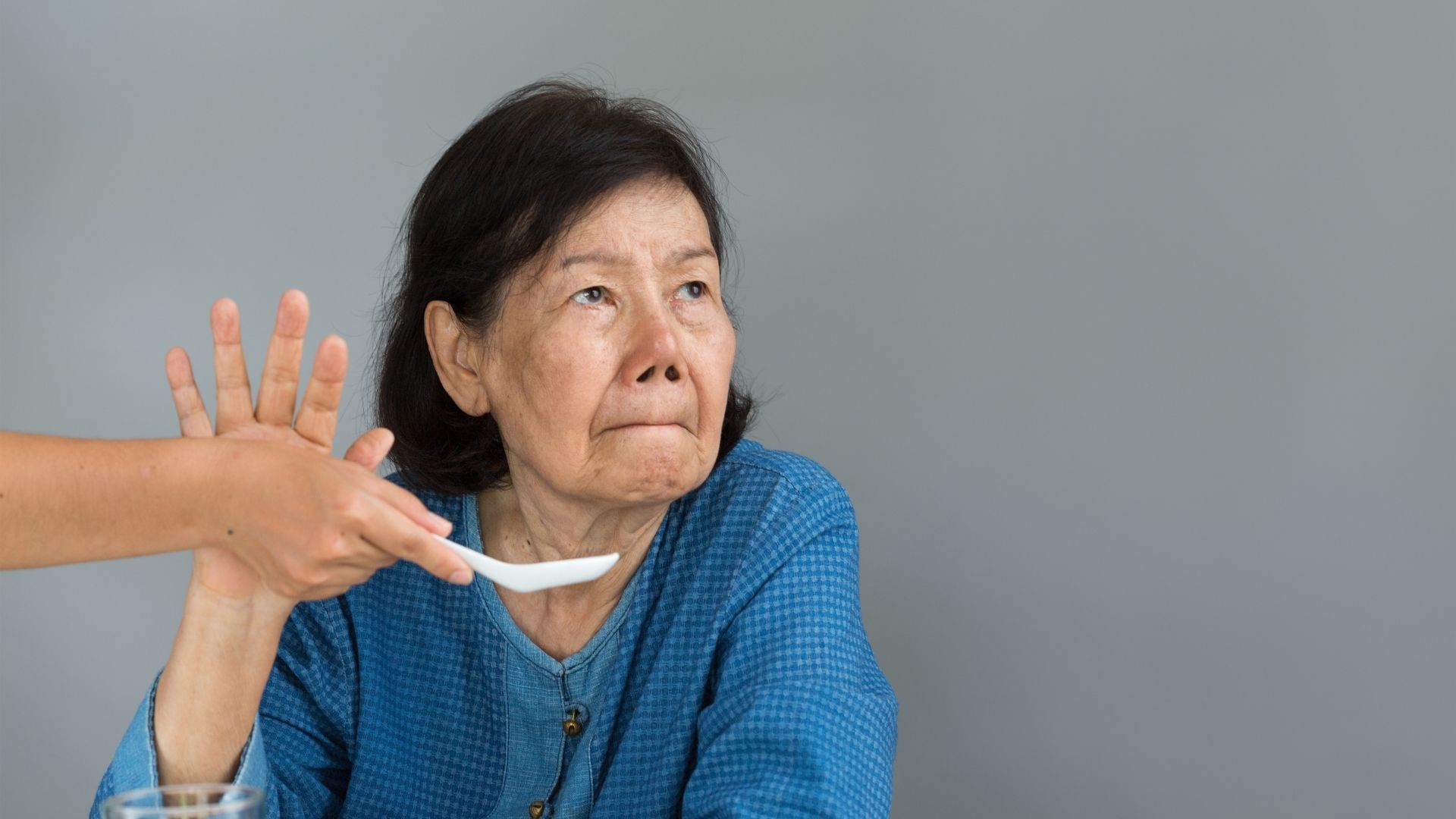 Please know it is NOT their fault and they are not trying to be difficult. You would have recalled accidentally having some fluids getting into your lungs while drinking and know it is a very uncomfortable and often painful feeling.

This is how they feel too but due to declining cognitive function, they are no longer able to express themselves.

As their lose more and more of the swallowing reflex, they would start to refuse fluids and later even semi solid foods. You may notice they always seemed to be moving their mouth and chewing that small morsel of food, sometimes for more than an hour. This is because they do not know what to do with the food as their brain could no longer tell them to either swallow or spit it out. So they just chew and chew.

At this point, if they are on any medication, please ensure you crush or grind their medication into powder, disolve in little bit of warm water and add with apple sauce or something pleasant. Do not give them in tablet form as there is a big chance they may not know how to swallow the tablets. For some medication, it is VERY DANGEROUS if it gets lodged under the tongue. I learned this the hard way.

My mom’s Alzheimer’s moved into end stage around May 2021. She was literally choking each time she drank water or fluids which caused her to decline water. Sometimes she also choke when eating semi solid food like rice porridge. But she was still consuming food.

However, her blood pressure went so low that our machine could not detect it. We took her to the hospital to see her cardiologist, thinking he would take her off the bp medication.

In the hospital, they could not get any reading too with both the manual method and the automatic machine. They took some blood test to check further.

Instead of just a short visit, the cardiologist said she has to be hospitalized immediately in ICU. As my mom could not communicate with them, they allowed me to accompany my mother in ICU. She was seeing 3 specialists from the hospital…the gastroentrologist, cardiologist and neurologist all along from the hospital. All three specialists told me that the nutrient and fluid intake that my mom was no longer sufficient to keep her alive. Insertion of a feeding tube would be the best solution to keep her alive.

They also recommended to have her hands restrained to avoid her attempting to pull out the tube.

We took her back and I did my best to blend all her food, grind all her medications. And coax and even force her to eat. But she wanted nothing but to sleep all the time. Still, with a lot of effort, I manage to get some fluid in by hand feeding, and resorting to syringing the semi fluids in when she refuses to eat from the spoon.

The scary thing was, her diapers were very dry. She could literally go almost a full day without soiling her diapers. This implies the intake was way below sufficient amount.

After about 10 days of trying, we got her to a government hospital as I could no longer afford the cost for private hospital treatment. From the outpatient, she was wheeled into emergency as the nurses also failed to get any bp reading.

They attempted a resusitation to raise her heart beat as it was too faint. The doctors in the hospital also said we have to insert a nasogastric tube to try to save her life. There are no guarantee as her vitals were bad and her body may not be able to absorb the nutrients. But they would try.

She was wheeled to the ward and her bed was placed in front of the nurses counter. She struggled while the tube was placed and her hands were restrained. There were some blood, and they suspected she had bleeding in her stomach so for the first two days, they administered nutrition via IV.

You may think I am crazy but I was never so glad that my mom started soiling her diapers! It means her food intake was sufficient for her to process and pass out the remaining as waste.

We took her back from the hospital and I have been caring for her almost round the clock.  We quickly bought a hospital bed, phlegm suction machine, oxygen concentrator, wheelchair with bigger wheels (to move her between different levels). As well as ongoing items such as diapers, absorbent pads, cotton swabs (to clean her mouth), tubes (single use for phlegm suction and enteral feeding, creams and tube feeding items.

In future articles  I would write more about nasogastric tube feeding.  You may refer to the resource page on this topic. Below is a video I have published in my channel on this topic:

Do people who got Alzheimer's know it years before the official diagnosis?
Is Fluimucil effective for mucus reduction in nose/ nasal feeding patients?
Why Caregivers Are Fat (gain weight)
When the Blood Pressure Could Not be Read or Detected by BP monitor
Spread the love
tube feeding

Caring for a parent with dementia/ Alzheimer’s