Massive buildup of mucus and phlegm is a common side effect that comes with nasogastric tube insertion (putting in a Ryles/ nose tube). Normally, while it is irritating to have so much of mucus, most of us are able to either swallow it to our stomach or spit it out.

However in the case of a person with dysphagia (problem swallowing due to neurological disorders), you would need to perform phlegm, mucus and saliva suction using a phlegm suction machine. This is especially so for a person with late stage Alzheimer’s/dementia who develop that condition- and it is especially dangerous because often they could not tell you what is wrong. 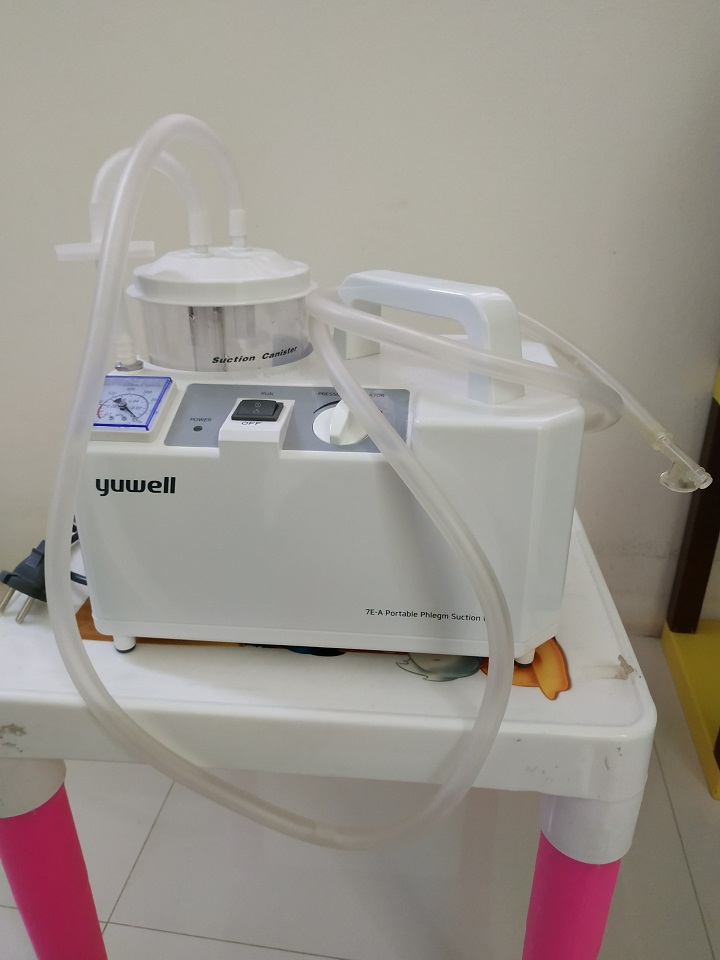 Why it is important to perform suction:

1. Unable to rid of the mucus/secretion on their own

Most of us would have experienced a chesty cough that lasted for a long time. We coughed so much especially at night that we could not sleep and become incontinent. We would get so weak from all the phlegm buildup, coughed so much that we no longer have the strength to cough anymore.

Imagine a person with dysphagia, who are unable to find a way to get rid of the enormous buildup of secretion that their body is actively producing due to irritation with the tube. When they develop dysphagia and is unable to swallow properly, nor they know how to spit it out, some of these secretion would accumulate in their mouth. When they lie flat or they move their throat, the secretion may ended up going to the lungs instead of the stomach. This can cause aspiration pneumonia due to bacteria infection.

Even a normal person can choke while eating food. Mucus and phlegm, if they are not being rid of naturally by the person, would harden or clump together with time. This is something I notice with my mom when initially, I had to rely on others to do suctioning, it was not done frequently (once every alternate or few days) resulting hardening of a lot of her mucus.

Even if a person does not have Alzheimer’s or dementia and know how to swallow, sometimes the throat muscles are weak and they are not able to use their energy to pull up the mucus that they could feel in their throat in order to spit it out or swallow it. Hence, you need to help them with the suctioning to move the mucus.

It is scary but I do know of a person with a nose tube who died through choking on his own mucus. He had lots and lots of secretion after being fitted with the nasogastric tube. That happened few years ago where it is not common for homes to get a phlegm suction machine. Suction is usually done at the hospital. Furthermore because he did not have dementia/Alzheimer’s and could swallow on his own, their family did not thought of getting the phlegm suction machine.

Few months after being fitted with the nasogastric tube, he choked on his mucus one day as a solidify piece blocked his airway. Please note this is NOT a usual case. But it could still happen hence you need to be aware- because of the overwhelming production of mucus, sometimes the person, already not well enough is not able to get rid of the secretion.

My mom also had a few close calls when solidified mucus blocked her airway and she suddenly struggled for breath. I watched in horror as her lips turn greyish blue due to lack of oxygen and her eyes rolled upwards. I quickly got help to sit her up (when they struggle to breathe, their body would stiffen and become very heavy).  I curve my palms and started hitting her back while she coughed. We also quickly gave her oxygen via the oxygen concentrator.

When a person have a lot of phlegm and mucus buildup, they will feel very tired and lethargic. How not to feel tired when part or most of the airway is covered by these thick secretion. Once you perform suction, the passageway would be clear (at least for a few hours) and they would be able to breathe.

Sometimes my mom would look so lethargic and not responsive. For Alzheimer’s or dementia patients, they cannot tell you what is wrong.  After suctioning is performed, I could often see a transformation. She has energy and her legs started moving or she started getting active.

Note: Measure their level of oxygen with an oximeter. Ensure oxygen is given during suction and a short while after if their levels are low.

Overcoming the Fear of Performing Suctioning

At first, we rely on the hospital to do it. But it is hard to transport her to the hospital each time to do suctioning. Also, hospital staff tend to use heavy duty equipment which may result in trauma to the throat because they do not have the luxury of time to do it slowly. After suctioning they would then prescribe a course of anti inflammatory.

We later bought a phlegm suction machine. At first, it was real scary to do it. But I had no choice. My mom was coughing a lot and I could hear a lot of phlegm build up. Initially she struggled and we have to restrain her each time we do the suctioning.

I also went through a period of doubt, wondering if I am causing her more pain and suffering when I had to do the suctioning. During the initial period, my heart felt heavy each time I had to do suctioning and I was so worry of hurting her. But I had to put that at the back of my mind and focus on doing that because I realize if I do not do the suctioning, the mucus can harden and either choke her or go to her lungs and cause bacterial pneumonia.

Gradually with time and practice, I got better at doing it. I was also less tensed. Due to radiotherapy treatment on her neck 21 years ago, my mom had lost all her teeth. So instead of prying her mouth open, I find a way to insert in a few fingers (wearing gloves of course) holding the tube to do suction. She tried to bite me at first but since she was toothless, it was not painful.

I also learn to relax and started doing suctioning gently. Meaning, I take a lot of care to ensure the suction tube does not stick to her skin, resulting pain and possibly bleeding. I learned to differentiate the sound between the tube coming in contact with the skin vs with phlegm/mucus.

Nowadays when I do suction, I manage it alone without any help. I no longer need to restrain my mom’s hands. I have learned to be gentle and careful when inserting the tube as not to scare or cause her pain. My mom, even with Alzheimer’s has thankfully stop putting up any resistance when I am performing suction. I no longer feel afraid or uneasy because I know this has to be done to make her feel better and help to aspirate out the secretions that she is not able to swallow/spit out on her own.

Anything we do, no matter how hard or scary, would get easier with practice. Phlegm suction is important to keep our loved ones with dysphagia comfortable.

For more information, you may refer to the video below. However I would be expanding on the contents of the video in subsequent post:

Cause of forgetfulness- restlessness and remorse
Why Alzheimer or dementia patient has a total personality change eg violence, sexual tendencies
When the Blood Pressure Could Not be Read or Detected by BP monitor
Hand restraints/special mittens for Alzhmeimer's/dementia patients on tube feeding
Spread the love
dysphagia, tube feeding

Kudos to Seniors Joining the Gym