Psoriasis is a skin condition where delineated discs or patches of inflamed tissues covered in silvery-white scales. Medically, there is no known cure for psoriasis- at best, treatments such as UV and usage of steroids (for serious conditions) at best is to contain or control the breakouts.

It is no easy to live with psoriasis. A friend I know suffering from that condition was once not allowed to enter another country because the immigration had thought he had some sort of infectious disease. But in actual fact, psoriasis is not infect others although the condition may be inherited by one’s kids whose parent has that condition.

Some have opt for traditional therapies like herbs or spend lots of money to visit dermatologist (specialists who specialize in skin conditions) but without much success. One also need to be careful when faced with seeking treatment- because some practitioners give medication containing steroids, which works well at first but would require heavier dosage as the same dosage gets less effective over time. These medication, when consumed too much is bad for the kidney and liver.

Mind-Body Connection link to Psoriasis- How one’s outlook in life, emotions and personality may play a role 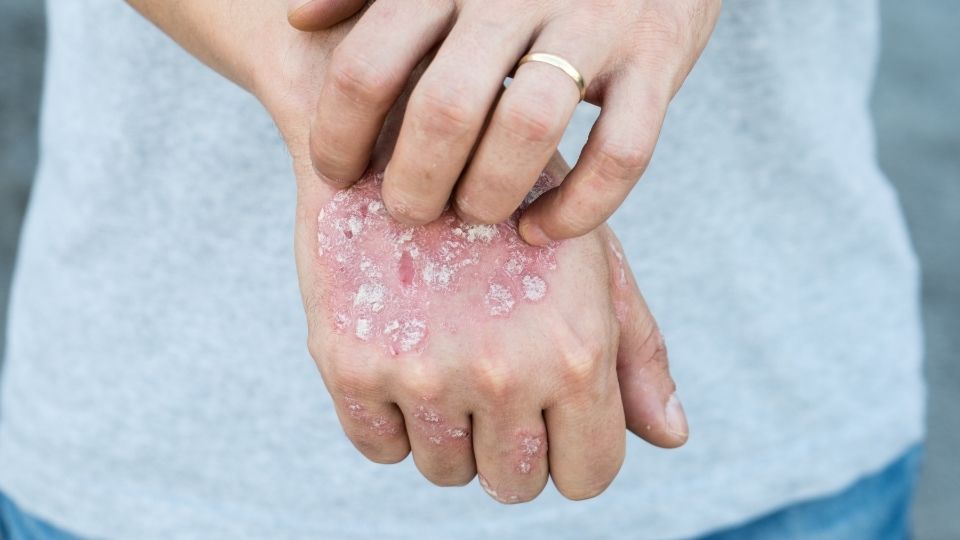 In the book, The Healing Power of Illness, German spiritual psychologist Thorwald Dethlefsen made an interesting mind-body connection to psoriasis. I find his observation insightful and may give an answer to those who have been struggling with this esteem-robbing condition to tie back to whether it relates to their self protection due to being afraid of getting hurt:

Much the same happens in the animal kingdom. Take away the scales of a scaly animal, and inside we find a soft, unprotected, vulnerable thing. Those of us who are so defensive as to refuse to let anybody or anything in are usually the most sensitive. A hard shell often hides a soft kernel. Yet the attempt to protect a vulnerable soul with such armor is not without its tragic side. Granted that the armor shields us from being wounded or hurt; yet at the same time it also shields us from everyone else too, including love and devotion. Love means opening ourselves up- yet that, too, is prejudiced by a defensive attitude. So it is that our armor hems us in, cutting our soul off from the land of the living- and in the process our fear starts to grow all the more. It becomes even more difficult to break out of this vicious circle. At some point we have to allow to happen what we have all along been so afraid of and so determined to resist- we actually have to let the psyche get hurt, in order to learn that it is not the slightest danger of going under as a result. We have to accept the wounds in order to experience the true wonder. This step occurs only under the external pressure that either our destiny or psychotherapy itself can bring to bear on us.

We have gone into the link between excessive vulnerability and self-armoring at this point in rather greater detail for the very good reason that psoriasis itself demonstrates the link in question very strikingly. Psoriasis, after all, leads to open places in the skin, to cracks and bleeding sores. This in turn places the skin at risk of infection. We can thus see how the extremes come into close conjunction with each other at this point, how the woundedness and the horny armor bring to light the conflict between the desire for intimacy on the one hand and the fear of intimacy on the other. Psoriasis often begins in the elbows. But then it is with the elbows that we ‘elbow our way through’: it is also with the elbows that we ‘prop ourselves up’. And it is at precisely these points that hardening and vulnerability duly appear. In psoriasis, self-delimitation and isolation reach their extreme point, thus forcing the patient- physically, at least- to become ‘open and vulnerable’ once again.

There is one person I know who have severe psoriasis- he had tragically lost both his parents at a very young age. Without much backing and financial support, he grew up fending for himself, learning carpentry, wiring and construction skills. To a big extend, the above description does fit him – he is not a person who trust others easily.

All along, he had sought external and medical treatments but found no relief to his condition. A lot of the mearge earnings he had gotten went to the cost of seeking treatment and yet his condition remained the same. People who saw him did not dare to touch him.

But later he got into a nurturing and loving environment where he had felt accepted and safe…. and he was slowly drawn out of his shell. He learned to let go of some of the bitter and self-protective conditionings that had served past their time… self-protection and caution had enabled him to survive but is not that relevant now. And his condition improved tremendously- of course as his condition was severe, he still have to seek the help of a qualified dermatologist. But unlike in the past, his body is responding very positively to the treatments and the effects were lasting. From the angry and scaly outbreaks, it was very much reduced to red patches.

Psoriasis treatments are often long term and the specialized medication and creams are very expensive. They may not even be effective as those with that condition would often find the outbreaks occurring with a vengeance in times when they are stressed due to feeling vulnerable at being pushed to a corner.  Validating and learning to deal with these feelings may be more effective and in the long term save one from spending a lot of money. Therefore, I sincerely hope that this article is able to help to a certain extend.

Lower back problems and lack of support in life
When life loses its meaning after retirement
I quit the gym... and lost weight
Stress, emotions and the correlation to lung infections/ cough/ asthma
Spread the love
5
highlight, mind over matter, skin