Many people like to enjoy a chilling glass of iced lemon tea on a hot day or after a days’ work. My friends frequently love to order ice lemon tea after walking around shopping or to accompany their meals – some restaurants offer free refills.

The belief that iced or cold drinks are very damaging for your health originate from Eastern beliefs. Any physician treating patients using traditional Chinese medication will tell you it is a strict no no to take any form of cold drinks- especially when your body is very hot or at night. My grandmother and the grandmother of my friends also frown on this.

Another strict no no is to take iced drinks with your meal. From biology, we know that our body need to digest food at room temperature. So if you were to accompany your meals with cold water, you reduce your system’s capacity to digest food at its optimum levels which will bring you all kinds of stomach ailments such as stomach spasms, acid reflux, indigestion, wind in the stomach, bloating, etc.

However, many in the West considered this to be merely old wives superstition and since there is no scientific basis of this, people are told to abandon this ancient ‘superstition’. Especially after exercising, we are told that our body need to rehydrate and as such, if you drink iced or cool drinks, the fluid will be absorbed quicker into your working muscles, thus preventing heat strokes or dehydration. 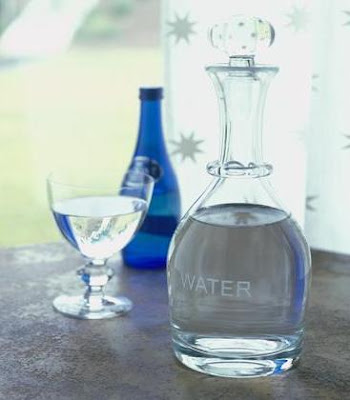 For a while, I also tend to resort to iced cold water after exercising or a day’s walking in the hot weather. If you were to visit Bangkok, most of their bottled water are sold chilled. In fact, all the 7 Elevens there carries chilled drinks and do not sell any bottled drink at room temperature. When you eat in the restaurant, the waiter will give you a cup of ice for you to pour your water into. This is because the city is so hot and the only way one seemed to feel any relief is to enjoy a cup (or cups) of iced drinks.

But after I acquired the habit of drinking chilled or iced water, I felt the weakening of my body. I find I have more tendency to catch a cold and my digestive system seemed to be more sluggish. Sometimes, when I drink iced water, I will feel the extremities (my hands, legs and feet) going numb. This is no good, I feel as it also indicate my circulation is no good. Giving up iced drinks is also not easy for me- especially in the hot tropical weather. Still, I am the type of person that like to test many theories and advise before I belief them- I don’t simply blindly belief anything. As I find that it affects my body, gradually, I began to cut down cold water and not long later, I felt the numbness in my body greatly reduced and my digestive system had improved (less bloating and feeling of sluggishness after a meal).

I felt compelled to write this article after I have came across this advise a few more times recently:

1. The advise on a book written on chi energy:
“when you are hot and thirsty, don’t take iced cold drinks. They may be pleasant in your mouth, but they are a tremendous shock to your digestive system. As a general principle it is best never to drink them. You should drink liquids at room temperature or, for relaxation, hot water or hot tea.”

2. I have a friend who used to suffer from ill health. She suffered from a back injury about 8 years ago and due to lifelong of not enough proper nutrition, her body is weak and she is quite susceptible to colds and coughs that refused to get better. Her digestive system is also weak and she cannot take food such as gluttonous rice, and things made from coconut. My healer friend told her to stay off from any cold or iced drinks/water. She followed the advise for quite a long time and saw her health condition improving. But because she was travelling and the weather was so hot, she started taking a cup or two of iced drinks- and she was happily chewing and biting ice cubes- an old habit. Straight away, I could hear the coughing and sneezing again. Needless to say, she stopped the ice drinks after that.

3. Recently I went to a shop selling Chinese medicine to get some medicated plaster and gui ling kao (Chinese herbal jelly that is very good in regulating a heaty body). The shopowner was very helpful and gave instructions on how to use the items. He stressed that it is very important: after a long day of hard physical labor, it is very very important not to drink any iced or cold water/drinks even though one is really tempted to do it. He said iced water is really damaging to our body and the effects will seep into our bones, causing arthritis in later years. He mentioned that the older generations do not take lots of iced drinks- so even though they developed arthritis from the wear and tear of joints, they could get relief from just sticking a medicated plaster on the affected area. But the current aging generation who have the habit of bathing at night, drinking iced water are now suffering severe pains- the pains are so bad that it can only be relieved by taking painkillers or pain injections. The number of people resorting to knee/hip replacement surgeries are increasing.
He gave a simile of a glass of iced water that you put on a glass surface. After you remove the glass of iced water and wipe the surface, you can’t completely wipe off the water stains- he used this to illustrate on the cold energy from iced water will go straight to your bones.

Just for old times sake, yesterday at about 5pm, I drank about 1.5cups of F&N Orange Crush (carbonated orange drink) with lots of ice cubes. It had been an extremely hot day and after coming back, I really feel very hot. Right after drinking, I burped and felt acid reflux- the sweet carbonated drink became sour after mixing with the digestive juice from my stomach. Not a good sign, because when acid relux happens, it means the digestive system is weak.

Then the weather, which had been very hot, suddenly changed and it started raining well into the night. And I felt sudden chill in my bones- I understand now when the Chinese medical shopowner told me that the cold/wind element from the ice will seep straight into the bones. I felt my body weakening and followed by some sneezes later. Even until today, I felt my digestion is weak and food is sitting in my stomach longer than usual.

This article is part of the Stomach Ailments Series.

Get Regular Medical Screening to Rule Out the Silent Killers
Mooncakes Galore! – how not to overeat